This week’s show is all about how to embrace playing small. I know you have probably heard of Tara Mohr’s very famous book about Playing Big, but I want to turn that on its head and really explore why playing small might be your best move and how it can bring so much more joy to your every day.

I’m always bristling when people say “stop playing small” because, ironically, there’s no other way for me to play, since I am 4’10. But even more than physical smallness, I always have felt that the idea of playing big or having to really push ourselves and put our voice out there in a big way maybe isn’t the right thing for many of us. I don’t think that playing big is always the answer. Instead, I’m sharing some of the things that have inspired me about playing small and why I think it’s really important.

Playing small can be staying true to who you are, being consistent, and following through.

Let go of Worrying about What Your Impact Might Be

The first thing, especially when we’re talking about finding our path, is to figure out what your message is and then follow it. If you go back and listen to the episode with Jenn Louden, there was this moment in the conversation with her where she just totally blew me away. I asked her how someone might go about bringing a big dream into reality, and her answer was to let go of worrying about what your impact will be. You have to continue to do the work and stay on the path without worrying about what your ultimate impact will be or who’s listening. You can step back from that edge a little bit and say, no, it’s okay for me to go internal and create the thing that’s really important to me. That lets you sink into this space that’s deeply authentic and really creative and lets you create the next thing that you love.

Say Yes to the Things That Feel Aligned

Early in this podcast, I cold pitched Danny Wood of New Kids on the Block. I wasn’t trying to play big. I was being courageous and stepping out of my comfort zone for sure, but it wasn’t in service of making myself bigger. I just really loved his message, and saw a connection between what he was talking about and what is at the heart of this show. I decided to ask him to be on the show, and he happened to have a solo album coming out and he said yes. I never knew that any of that would actually transpire. I had to say yes to all the little things, and it was only by playing small and being really specific and true to my content and true to my message that I was able to pitch and have someone like Danny Wood accept!

You Are Only Accountable To Yourself

If you haven’t yet seen Miss Americana, the documentary about Taylor Swift, she talks about how she was so worried about the thoughts of other people that she found herself focusing only on external praise. There’s a moment she says that’s all that she was working for, and she realized that the only person that she should be holding herself accountable to is herself. If you get too wrapped up in the idea of playing big, you could be as big as one of the most famous superstars in the world right now, and you could still feel like you’re not big enough. Even one of the biggest pop stars gets caught up in the feeling of not doing enough, not coming up with the next big thing, and the pressure’s on. The pressure that comes up when we start to think about the idea of playing big and taking up space and getting into hustle. And it has this very subtle way that makes us question well, maybe if I just pushed harder, maybe if I just played bigger, maybe if I just made more noise, maybe if I just took up more space, then people would see me, and my business or this thing that I’m trying to bring into the world will do better.

This idea that we have to be big in order to be important or worthy, or to be a leader or well-received by others starts to rob us from that experiential first step. The thing is, everybody starts small. Nobody necessarily knows where exactly they’re headed and what you have to gain along the way is the experience of each small step that you’re taking. The moments where you act in integrity around something, in the moments where you do the right thing for a client, in the moments where you just keep pitching yourself and putting yourself out there in small ways that then lead to the eventual growth. You don’t really need more certifications, or another degree, or another external thing that says that you’re ready to do something. If you’ve got the idea, you’re ready to do this. It really can change your life when you choose to say yes to things and continue to say yes to them, even though they might be the hardest choice you’ll make some days, and even if that means that you’re letting go of things that you thought were important.

Owning What ‘Playing Small’ Can Look Like: Work Towards Your Own Definition of Success

Now more than ever, I find that I am asking myself “How big do I really need to be?” If we believe that ‘big’ is the only thing that marks us as worthy, or that being famous is somehow the only marker of success, it doesn’t leave us room to count success in smaller ways. What I mean by that is there’s a lot of success to be had in having a happy home, and in having strong relationships with the people that matter to you.

Those things don’t really have room in the definition of playing big that we often think about. When we go for that kind of big, for the hustle, the #Bossbabe, whatever that looks like, oftentimes it’s pushing everything else aside in service of playing big and having the next bold move and taking up space. The idea of taking up space in a small way, of allowing yourself to want those small, lovely details or little moments with people that matter, that is really enough to sustain you.

It’s starting, moving things along, and keeping your eyes on your own paper. It’s continuing to make steady, slow progress every day. There’s so much courage that’s involved with that, and it gets dismissed when we get into the idea that we need to play big. Can we allow ourselves to be enough and sink into those moments? 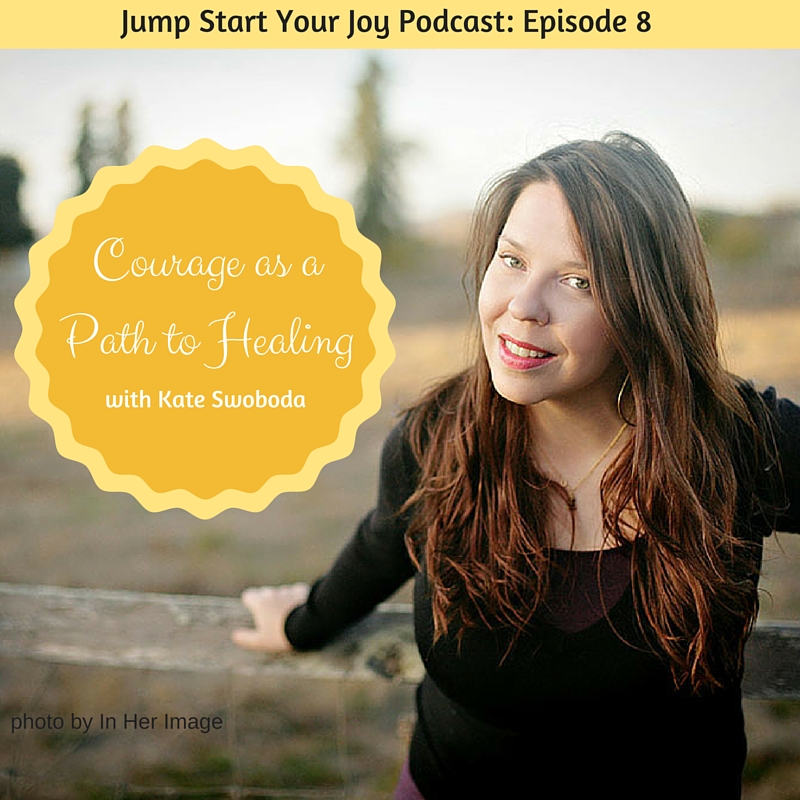 Episode 8: Kate Swoboda on ‘Courage as a Path to Healing’ 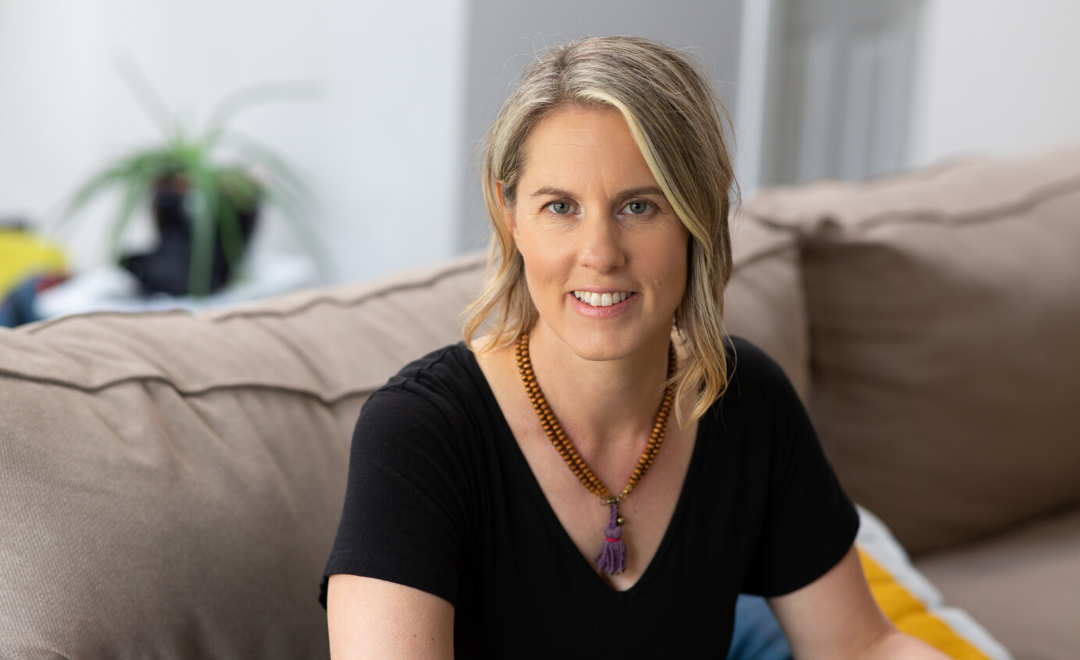 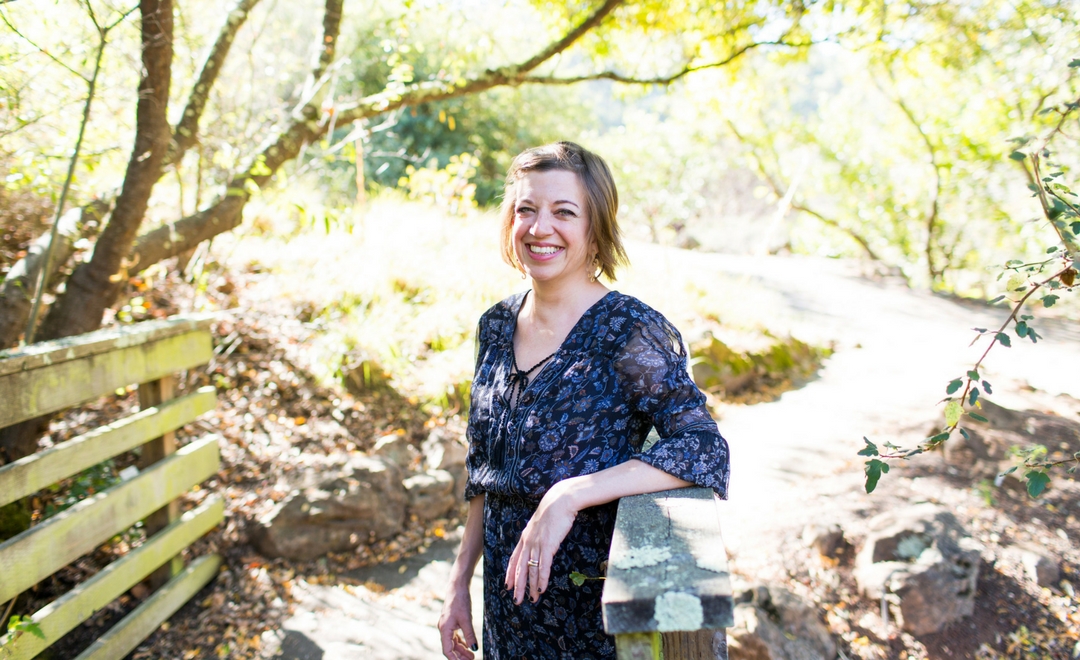