This week, to kick off “Courage Month,” I’m so excited to have Iman Gatti on the show to talk about the courage to transform trauma and grief. Iman and I met in coach training, and along with being a life coach, she is a grief and trauma specialist, and speaker. Iman was orphaned at age 6 and then spent her childhood bouncing around foster care, and is now living an amazing life with her husband, in Canada. Here’s the thing I love about Iman … she has the most amazingly joyful spirit, and the connection I felt with her the first time we met was immediate. She’s radiant, and full of life, and she’s full of wisdom and love. 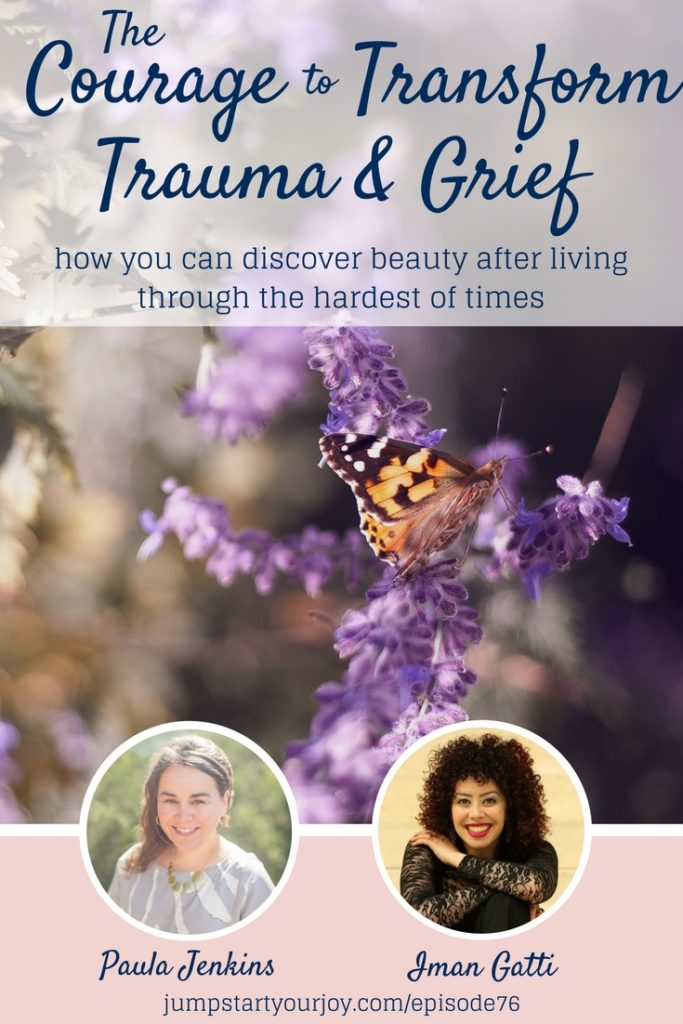 Iman courageously and beautifully shares so much of her own story in this episode. From being orphaned, to dreaming of speaking in front of people as a little girl, and eventually coming in to her own as a very powerful and motivational coach, Iman is someone I admire. As she says in the interview, her history would not have made her someone you would have “bet on” growing up. She witnessed her father kill her mother, and was then in the foster system, and struggled to find her way. Having seen the effects of trauma on her own life, she now helps others who are living through their own difficult situations.

“If you don’t make time for joy, you’re going to have to make time for suffering. Because suffering will sneak into your house and take over, whether you like it or not.” – Iman Gatti

In this episode, Iman and Paula talk about:
– Iman’s earliest sparks of joy with her family, nature, animals, and farmland
– seeing her mother murdered at age 6, and entering foster care
– how Iman now helps other people like her, who have survived the unfathomable and want loving, fulfilling, and joyfilled lives
– how suffering and trauma can lead people to look for more in their lives, and what happens when we have nowhere to go but up
– what happens when we don’t make time for joy (suffering comes to find us)
– what you can do to get on the other side of trauma to live the life you dream of
– that balance looks like imperfection
– how meditating can help you find inner calm
– Iman’s standup comedy routine that involved her purchasing men’s underwear
– Iman’s thoughts on how to jump start your own joy with forgiveness, gratitude, and self love

I don’t know that last time I was so inspired, nor laughed so hard. Thank you for following your heart, and sharing your story with all of us. As we talked about what day to post this episode, I proposed March 7, as the kick off of “Courage Month.” Iman told me it would be the perfect day, as March 7 is her mother’s birthday. I want to thank Iman for sharing this day, and all of her amazing joy and wisdom, with all of us.