From the time Zoom was very tiny, I have always talked to him. Full conversations and explanations. As a baby, he’d listen intently, and smile, coo, react in gibberish. But it didn’t matter to me. This was all still quality time with my little one.

Early on, I remember telling him about my “job” as his Momma. One day, probably a year ago, he’d become obsessed with an extension cord in the living room. He still gets obsessed with things, and when he’s in that mode, it is very hard to wrangle him away from whatever it is that he’s fixated on. Extension cords were an early favorite.

My, how he’d holler at me when I’d take him away from those cords. He would be furious.

And that day, I told him, “Zoom, my job as your Momma is to always love you. Always. I will be here, and you will always have your Momma. And nothing would ever change how much I love you.” He looked satisfied, in a baby-like way.

I went on, “But, there’s a second part of my job as your Momma, and that is to always keep you safe. And some days, even though you don’t understand that you’re in trouble, or doing something dangerous, I’ll have to stop you from getting hurt. And the hard part of being a Momma is when keeping you safe means I might have to do something that makes you unhappy. But you need to know that I’m doing it because I love you and I’m doing my job to keep you safe.”

I don’t know that the explanation sunk in for him, because he was still obsessed as all get-out with that darned extension cord. Determined to get it in his mouth. So of course I moved it and he was mad.

Later that day I thought about what I’d said to my little boy. “I love you and I will keep you safe.” Yes, that’s pretty much my mantra for him day in and out.

And I realized, it’s God’s role for each of us, too. God loves us and will keep us safe. Even in those moments when we’re hell bent on chewing on a proverbial extension cord. Maybe that extension cord is a bad relationship, a career that isn’t a good fit, a habit we really should let go of. We’re obsessed, and even as adults, we will cry and fight with God about getting what we want, demanding our way, no different than a one year old who doesn’t understand why he can’t have what he wants.

What if, just what if, God is just playing His role in keeping us safe, from keeping us from something that will harm us. We can’t see the bigger picture, for certain. We don’t have the experience to understand that whatever we’re doing is a bad idea, likely for many reasons. But if we take to heart that God loves us and will keep us safe, maybe some of those hard times and disappointments will start to come into focus for us. We were kept from the things that could harm us because God loves us. And that He understands the bigger picture, and is guiding us along to safety. 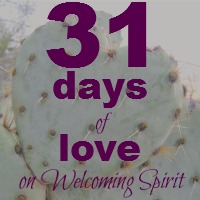 A Pause on the Path, Tell Me a Story

December 4: Being a Mother