At a recent about “Balance,” I introduced a retreat activity called “Rock, Pebbles, Sand.” This itself story was featured in Stephen Covey’s book First Things First, but has also made it’s rounds all over the internet. 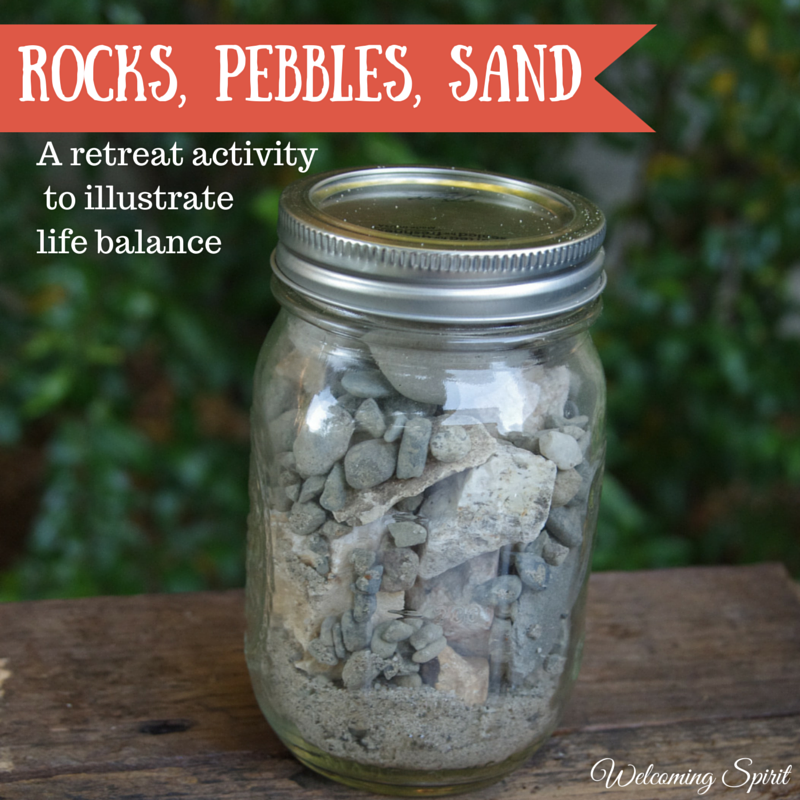 A lecturer was leading a seminar, and announced  “Okay, it’s time for a quiz.” Reaching under the table, he pulled out a wide-mouthed gallon jar and set it on the table next to a platter covered with fist-sized rocks. “How many of these rocks do you think we can get in the jar?” he asked the audience.

After the students made their guesses, the seminar leader said, “Okay, let’s find out.” He put one rock in the jar, then another, then another–until no more rocks would fit. Then he asked, “Is the jar full?”

Everybody could see that not one more of the rocks would fit, so they said, “Yes.”

“Not so fast,” he cautioned. From under the table he lifted out a bucket of gravel, dumped it in the jar, and shook it. The gravel slid into all the little spaces left by the big rocks. Grinning, the seminar leader asked once more, “Is the jar full?”

A little wiser by now, the students responded, “Probably not.”

“Good,” the teacher said. Then he reached under the table to bring up a bucket of sand. He started dumping the sand in the jar. While the students watched, the sand filled in the little spaces left by the rocks and gravel. Once more he looked at the class and said, “Now, is the jar full?”

“No,” everyone shouted back.

“Good!” said the seminar leader, who then grabbed a pitcher of water and began to pour it into the jar. He got something like a quart of water into that jar before he said, “Ladies and gentlemen, the jar is now full. Can anybody tell me the lesson you can learn from this? What’s my point?”

An eager participant spoke up: “Well, there are gaps in your schedule. And if you really work at it, you can always fit more into your life.”

“No,” the leader said. “That’s not the point. The point is this: if I hadn’t put those big rocks in first, I would never have gotten them in.” 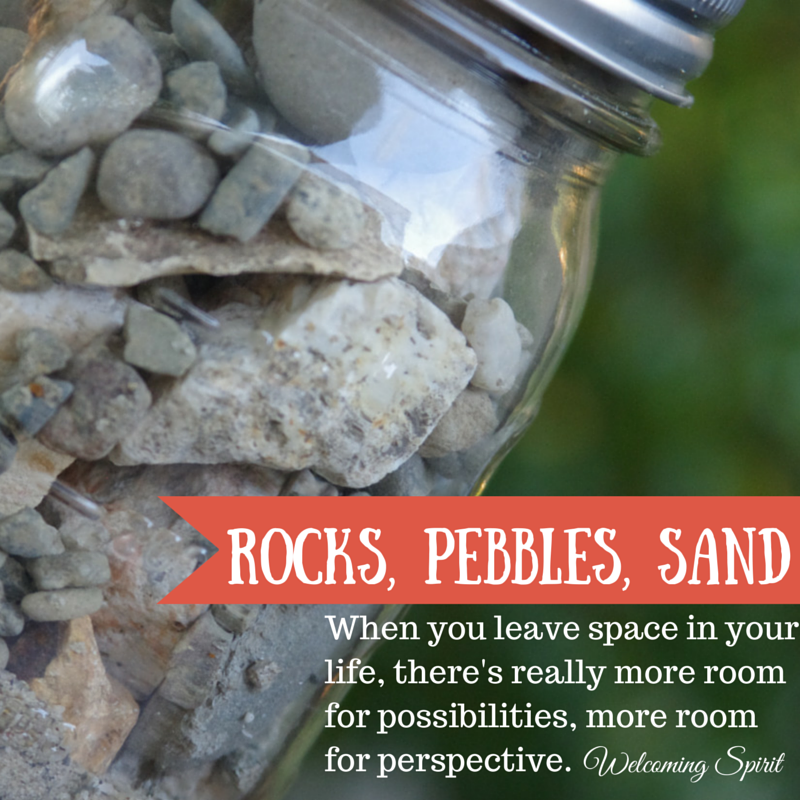 We led this as an exercise at the retreat, and had each person load up rocks, pebbles, and sand into a glass mason jar. Some were very serious about it, fitting in as much as they can. One self proclaimed Project Manager (not me, but another one was there!) actually dented the lid of his jar closing it because he was so determined to get in as much as he could.

And then there were the people who left space between the rocks, the pebbles and the sand. I was fascinated by this. The jar and its contents were so much prettier with a tiny bit of space. If the jar was full it really just looked like a jar of sand because of the way the sand filled in around everything. But, when there was space, you could see the details of the big rocks, see the pebbles, and see the sand settle. You could shift the contents without taking everything out.

I realized, we all did, that when you leave space in your life, in your schedule, in your jar, things are easier. There’s more time to take in the beauty of life. There’s more room to shift something if there’s a last minute opportunity that comes up. When there’s less in the jar, there’s really more possibilities, more room for perspective.

As is often the truth with retreats, I was pleasantly surprised by the lessons I learned that day. And I’ve been looking for ways to leave a little extra space in my schedule, in my heart, in my head so that I can have room to enjoy all the things that life has to offer. 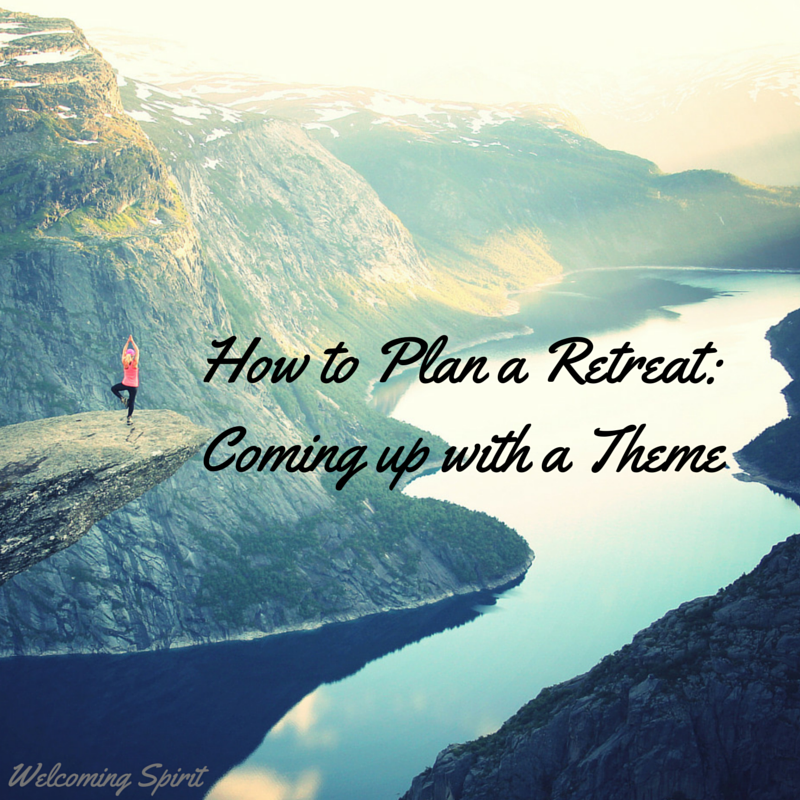 How to Plan a Retreat: Coming up With a Theme 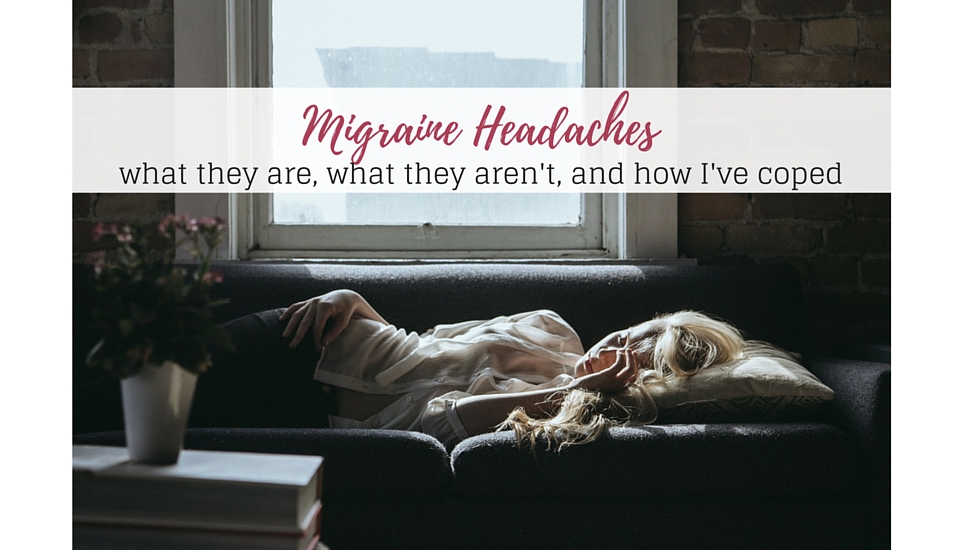 Make Sure You Are Running Towards Something

How to Do a Centering Prayer Meditation