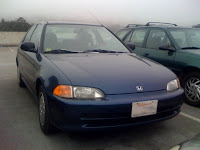 Today my car, a 1995 Honda Civic, broke down in the BART parking lot. Bless his little heart, he’d had enough and his distributor gave way, rendering me immobile, sitting in a parking lot for public transportation. There’s a bit of irony in that since I could not park the car, and it was sitting in the way of most of the traffic. But at least it didn’t break down in the middle of the highway where it would have been a lot more burdensome for everyone involved. Traffic management would probably have to place road traffic cones around my car and redirect the vehicles until a tow truck came. Anyway, instead of abandoning my car and jumping on the next train, I called the tow truck and waited for them, and then escorted my little car to the mechanic.

I could be upset or bitter or angry about this. It’s going to cost a lot to fix. Christmas is around the corner, and according to Yahoo this afternoon, we’re officially in a “Depression*” Personally, I’m somewhat in a lurch by having my car out of commission for 3 days. I might just learn how to keep some spare parts at home by buying carparts online (or offline, as you choose), and maybe learn how to make small repairs for any problems that Cobie might face in the future. But, instead of any of that, I am grateful. And here’s why.

1. I knew this car needed some maintenance and it broke down in a safe spot. I was not caught in the rain, in the middle of an intersection, or in the middle of nowhere. I had my cell phone, and I was safe.

2. Something fairly safe is what broke first. When I took my car to a mechanic who works for somewhere like this Lakewood auto repair company, he took a long and thorough look and found that the brakes were nearly shot and could wear out or lock up at any time, having only 1% left on them. Those brakes have 80,000 miles on them. The distributor is what broke today, and all that did was leave me unable to go anywhere. So, I’ll have to schedule an appointment to get them fixed with the mechanic as they come highly recommended.

3. My car has 180,000 miles on it. Almost. We have gone across the country three times together, and I haven’t had a car payment in 10 years. It puts a few things into perspective. If I do the math, it’s only $42/month since the last time I had something fixed on that car. Now that’s a good deal.

4. This silly problem forced my hand on finding a mechanic. I’d looked one up last week, so I knew who I wanted to call. Now the car will have a tune-up, and I’ll know that I have a good mechanic to trust.

Honestly, I’m just glad that the problems that Codie has can be resolved. Though it isn’t ideal that I need to get him fixed, at least he is not completely destroyed like my friend’s car was the other week. She was in a car accident, and not only did her car get written off because of its damage, but she also had to be hospitalized due to some of the injuries that she picked up. Luckily, she had recently read these geico reviews because it was time for her to renew her policy so she had the coverage she needed to claim compensation. Phew! What a relief. It could’ve been a lot worse (especially if you look at the state of her car), so she definitely got off lightly. I’m just glad that the same hasn’t happened to Cobie.

All in all, Cobie has been a great car… if I don’t say so myself. And, with this little tune-up and fix-up, I know he’ll be good for a couple more years.

A Trip to The Sea Ranch on the Northern California Coast

A Trip to New Orleans: Part One

Patience, and the role of the Pharmacist

How I Got to Work Today