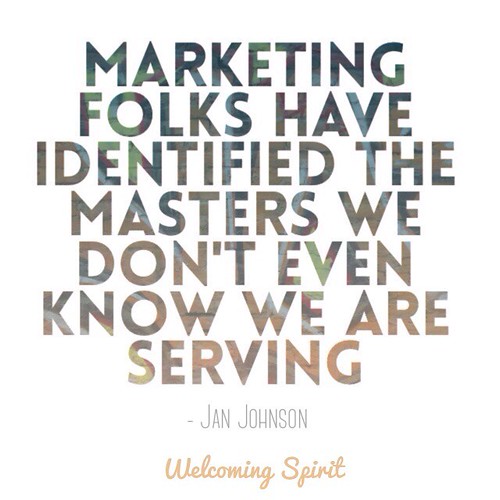 In the book Abundant Simplicity by Jan Johnson, I discovered a quote that hit home pretty hard for me.

“Marketing folks have identified the masters we don’t even know we are serving. ‘Marketing theory says that people are driven by fear, by the promise of exclusivity, by guilt and by greed, and by the need for approval. Advertising … promises to resolve our discomfort with a product.’ Advertising also plays in to our fears that we won’t have enough, that we’ll miss out, that we’ll be shown to be inadequate, that we’ll be misjudged, rejected and left out, that we’ll face others’ disapproval, anger or disappointment.”

This last year I took a job back in advertising, with a former boss who assured me that I could “do the work in my sleep.” The office prided itself on being the most profitable of all of the agency’s offices across the globe, and boasted having a well known local company as it’s “bread and butter” client.

It turned out that I was being hired to work on the worst account in the agency, one that had never kept a project manager or an account manager for a full year. That the profitability came at the price of scheduling all employees well over 50 hours a week, and that the client was a renegade nightmare.

Add to this a CEO who obsessed about what time each employee came in each day, perching himself at the end of the room so he could keep track of each person’s attendance. And there was the fear that if your account was doing poorly and showed up on his radar, you’d be lucky if you shook his attention and micromanaging ways.

So you can guess what happened. Our account had a tragic year, with clients changing roles just as we were working on key parts of a large project, and the scope of the project changing wildly up until right before launch. A coupon was going live and we had to have the supporting pages up on our site to support it. And everything came to a head the weekend before this was going live.

That weekend, I got several calls from the CEO. He was worried, and I got the sense that he wanted me to know that this project now had his attention. At a critical point, it became apparent that folks would have to work the Sunday of the weekend. One of our programmers is very religious, and the CEO said to me,”Make sure Bob finds a way to work tomorrow. I know he’s a very religious man, but I’m also sure that God would not want us to lose this account. Make sure he understands this!”

In other words, he didn’t give a rat’s ass about the people on the team, or their religious beliefs, he just didn’t want to lose a client.

I felt sick to my stomach as he said this. Dry heave sick.

It was also right about then that I decided I was over and done with advertising. Sure, I’ve worked with good agencies, but the fear, or rather the Fear, had jumped in and taken control it was ruling everything we did as an agency. Not only were the principals of advertising being observed in the product we were making (creating ads to entice people to buy a product for fear they were not good enough), but those same principals were ruling the management of our agency. It was fully living up to Johnson’s observation above that, “Advertising also plays in to our fears that we won’t have enough, that we’ll miss out, that we’ll be shown to be inadequate, that we’ll be misjudged, rejected and left out, that we’ll face others’ disapproval, anger or disappointment.”

During that phone call, I was well aware that I was being asked, if not told to step over some pretty serious personal boundaries. There was NO way I could ask a co-worker to deny his religion, or ask him to work when he’d made his own boundaries around working on Sundays clear to me.

At the same time (and this is what is so different for me than previous jobs with unbalanced management approaches), I had a strong and liberating sense that this man had no control over me. He’d lost my loyalty awhile back, because I couldn’t get behind his fear mongering. I saw right through it as a weakness. I know who I am, and I know what’s important to me, and I’m not afraid to do what I know is right. I know my faith and know that I am worthy of being loved and respected, at home and at the work place. It’s taken a long time to get here. Even if the CEO was nervous about the outcome, I know that I have what it takes to carry the project across the finish line successfully. And I wasn’t about to let anyone else’s fear or anger or disapproval mess with my head. No, the stakes were too high to let myself get flustered.

You see, I’m one of those project managers that works their butt off to get my job done correctly. I was sacrificing my own time with my family, and I’d spent days’ worth of overtime working to get this project out the door. I’m not a slacker. I’m not one of the people you have to worry about.

And so I called Bob’s boss. We came up with a different plan to get the work done and let Bob have the day off. And I called the CEO, who likely wasn’t pleased because I hadn’t followed marching orders and told him what we were doing.

Did we launch on time with that coupon? Damn straight. 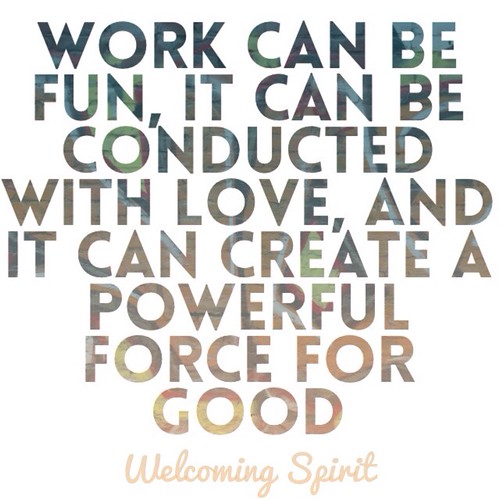 Did we lose the client? No.

Did I look for a new job starting that Monday because I was fed up beyond belief by the total lack of respect for people’s beliefs and time? And of a place being driven by fear? Yes.

I couldn’t be happier to have left, and to have left on my own terms. I’m happy that I recognized the Fear for what it was, and stood up to it in my own way. I’m pleased that my project launched, and that I stayed true to myself.

And that’s what the next three years are all about for me. Staying true, becoming the person I already know I am, and really living out some of the things I know are true – (and to paraphrase Anita Roddick) –  that work can be fun, that it can be conducted with love, and that it can create a powerful force for good.

Learn How To Do a “Stop, Start, Continue” to Figure Out What Fits in Your Life