Every family has its own Christmas traditions. My family opens gifts on Christmas morning, and as little kids my sister and I often woke up so early (like 4am), and ran into our parents room to wake them up before we went downstairs to open gifts. My parents quickly were on to us, and then there was a list of things we had to do before we could wake them. We had to brush our teeth, and later we started having our stockings put outside our door, and we were supposed to spend time going through those before we could wake up our parents. I now totally understand that they were trying to buy a few more precious moments of sleep after probably going to bed quite late.

So, Sean and I started our own traditions since we’ve met. We like to open our gifts to each other by ourselves, just so we have a little time together to enjoy the gifts. Then we usually go over to my sister’s house and open the rest.

Last year, as we were packing up the gifts for family, Sean handed me one that was from him to me and said that it had been forgotten and it needed to go over to Sara’s house. I didn’t bat an eye and just put it in the bag with the other gifts.

Well, about midway through gift opening, Sean told me I should open that one gift that we’d brought along. Before I knew it, I was opening an elaborate box with a gorgeous ornament in it. The ornament opened up, and … inside … was a sparkly diamond ring and a small card that said “Will you marry me?”

I looked up, very quietly, with some little tears in my eyes. Sean was on one knee and had taken my hand. He repeated his question out loud. “Will you marry me?” I could barely whisper a “yes.” before hugging him.

We now will have our own special tradition, and a wonderful memory forever attached to Christmas morning gifts. 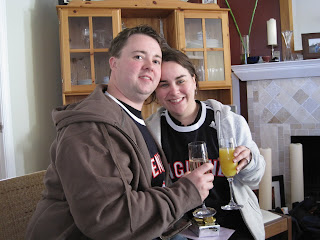